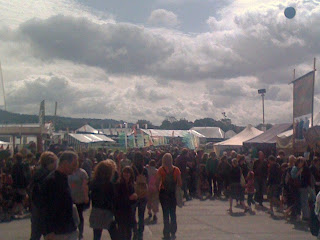 We went to greenbelt 2009 on Saturday 29th to try it out and see if it's something Rachel and I could do next year for the whole weekend.  I won't keep you all in suspense, we had a fantastic time and will definitely be going again next year.  This is what we did.

We left Reading at 730 and were parked by 9am. We met up with another family from church and made our way inside the Cheltenham racecourse grounds. We spent the first 15mins or so pretty disorientated, we couldn't even find anyone who knew where we could buy a map!  But within 30mins we had a map, had met up with everyone else who was there from church and were in a queue for a talk at the centaur.  Now I have to say, queuing is a major downside of greenbelt, I wasn't expecting it and I didn't enjoy it (especially with a 4yr old!). Eventually though we got into "Shame and how to survive it" which was well worth the wait.

From this I decided it would be great to spend some time in the quiet reflective space called "soul space" (grandstand level5).  I was extremely impressed with this, there were books, pictures, stations and lots of places to pray.  Rachel really enjoyed it as well, she made a few stars and drew sone wonderful rainbow pictures.  As an added bonus I caught half of a talk on spiritual direction which gave me much food for thought and makes me more determined to take a retreat soon.

As we exited the grandstand we found "messy space" - an area set aside for anyone to worship thru play and craft and mess. I was disappointed that all the messy church was on Sunday but this more than made up for it.

From there we had lunch - I never expected to get a wonderful fresh tuna baguette - yum. And then we wondered  round the shops, stands, tents and displays including Greenhaus (fab) before meeting everyone else in our group to plan our afternoon.

This brings me to the 2nd downside of greenbelt; there is too much to do - and yes I know this is a dichotomy.  it can be a real challenge to decide what to see at any particular time, which one is going to be best? In the end I decided to just put my afternoon in god's hands and see what I'd see.

So first off we went to hear "Debunking Dawkins: How we can engage the New Atheism". I haven't mentioned the fact that Mike had come with us, Mike the staunch atheist, my unconvertable husband; he wanted to check it would be ok for R&I  next year! Well he enjoyed the talk as much as I did, I'm not saying it moved his mindset at all but it got him thinking and that's a big deal! As for me, I giggled, I enjoyed and I took a lot away that I will mull on in the future.

From there we hunted for ice creams - R had seen lots of people with one and deserved one after quietly sitting thru an hour talk. We found her desired form of ice cream by the big top; whilst she ate we wondered around and heard some interesting music - "the fancy toys". So into the performance cafe we went and listened to their set, R fell asleep on me but that's no comment on the band or their set!

They finished just in time to get to Bethlehem for "Time Heals & Other Cliches"; a panel talk on grief. This was something I had planned to see and most of us from church went along. It was truly fantastic; moving, emotional, sad, funny, true, hopeful. I have experienced grief (I've survived 4 miscarriages) and studied bereavement and held others' hands as they walk the same path; but never before have I heard such an open discussion on the process of grief and what we can do to help others as they walk the path.

And so it was dinner time; R had pasta bolognese (recommended to me thru Twitter) and we had hog roast. Everyone from church got together, huddled behind a tent (as a wind break) to eat, chat, share experiences and express thoughts. The kids played with bubbles and a beach ball - what else can 5 kids from 4 to 13 need? (the teens were staying well clear ;))

And so our day came to a close, with a 90min drive home we decided that we didn't need to stay all night. We heard a band on the mainstage as we meandered out and we headed for the car.

I can honestly say greenbelt was nothing I was expecting. It was smaller than I thought but with more to do; it was even safer and friendlier than I'd hoped and it had a vast range of activities for us all to enjoy. We will come again and in the meantime I'll be downloading the talks I missed!
Posted by LLM Calling at 12:38 1 comment:

Email ThisBlogThis!Share to TwitterShare to FacebookShare to Pinterest
Labels: greenbelt, standing in the long now

I may have been preaching for 10 months but this is the first service I have preached at which is purely for adults; all previous services have been all age or child focussed. I had been dreading the day when I would have to jump into the "adult sermon" boat but in the end it was out of my hands (funny that hey) and I offered to help out so that an incredibly overloaded NSM could concentrate on the funerals she is taking this week.

I have to smile at the fact that my comfort zone is a pre-planned and organised life and yet three times now the Spirit has brought me to new experiences with very little notice. I am learning that my "comfort zone" in facts allows me to panic unduly ahead of time of events. When I allow myself to be guided I find that a couple of days notice is enough for me to psych myself, prepare and not get to the total panic place. learning!

The lectionary was Matthew 20:1-16 The Parable of the Workers in the Vineyard. I went about preparing the sermon very differently than previously. Instead of a practical example coming to mind and my building a sermon around that, I found myself reading various translations, commentaries and undertaking more study than intuitive process. However the middle stage was the same, prayer, contemplation and time for it to come together. Then the final stage and it came together straight away as a mind map and there it was ready to give. 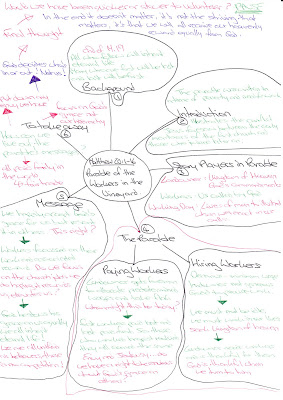 The service itself is lovely, it's the older generation, entirely women today, and they are friends worshipping together. They were excited to have someone different preaching and extremely welcoming. They were also bowled over by having Rachel (very almost 4) with us and thrilled that she sat quietly throughout the service except for at the end of my sermon when she turned to the congregation and said "that's my mummy!"

The sermon went well, it took me a few minutes whilst I felt extremely nervous and a bit stilted but then I felt it change and knew that I was being guided; it all flowed from there. I managed to get in everything I wanted to; mostly about the importance of us all realising we have roles to undertake for God but there is no hierachy, we're united in our faith and share in the grace. I had quite a few people congratulate me and ask me if I would be coming back to do another, I await clergy feedback.

All in all I am thankful for the guidance I am given daily, for the experiences that are offered and for the ability to provide my role the best I can.
Posted by LLM Calling at 19:16 1 comment:

It's August; it crept up on me without enough warning!

This is the month our daughter turns four.  Therefore it will include parties and fun along with my celebration of 4 amazing years as a mum knowing the love and wonder of a child.

It's also my "month off from preaching" as promised by Neil.  Can you guess how much time I have for relaxing?

But to start, ponderings on today ....  It was fantastic to be in the congregation this morning and absorb someone elses sermon, that has barely happened in 6 months. Having now experienced writing and delivering sermons I got so much from watching and listening.  The theme was the bread of life and it's given me a lot to take away.  I also found I was much more prayerful and connected during the rest of the sermon.  When I'm delivering then I'm filled with anticipation and nerves before it and still buzzing with adrenalin afterwards.  Today I could just listen, absorb, sing, pray and worship; a filling experience.  So today I've confirmed that I need to have time for me to be filled!

The other positive that came out was that when I'm just one of the congregation I can use my pastoral gifts.  A lady i know caught my eye after the service, I spoke to her and we spent time together talking about her grief. I don't know how much I helped but this is how I know I'm called to minister and that seems to be more possible when I'm not 'upfront'.

So, this month off!  I have 4 weeks off from preaching and that is wonderful.  After that I've been convinced to make my first move into a different service and will preach on Sunday 30th.

I obviously needed the month off from preaching because my diary is already filled with meetings and events.  I have a couple of LLM events; intercessions for a few weeks; the prayer walk preparation and also Children's and young peoples developments.

But I am learning.  All this activity could get too much, but I believe I'm meant to take this time to think about my calling and it's aims, focus and direction.  I am reading books on book lists and Finding more prayer time.

So here I am using this time I've been given to look at different areas I'm drawn to.  An idea for the annual carols round the crib nativity came to me "just like that" so I've knocked together a draft script to see if the young people and leaders like it.  At the same time I was able to enjoy and fully engage in a bible holiday club I took Rachel to.  It hit me so strongly that this is something we could provide and now I gave time praying for guidance on providing our own.

The last thing I have time fir is the review and renewal of my calling, perfectly timed as Neil has asked me to meet with him on Tuesday to tell it all to him.  It's all coming together!  but why am I surprised? When I hand it over and let God use me then it all makes sense.  Amen.
Posted by LLM Calling at 08:21 2 comments: 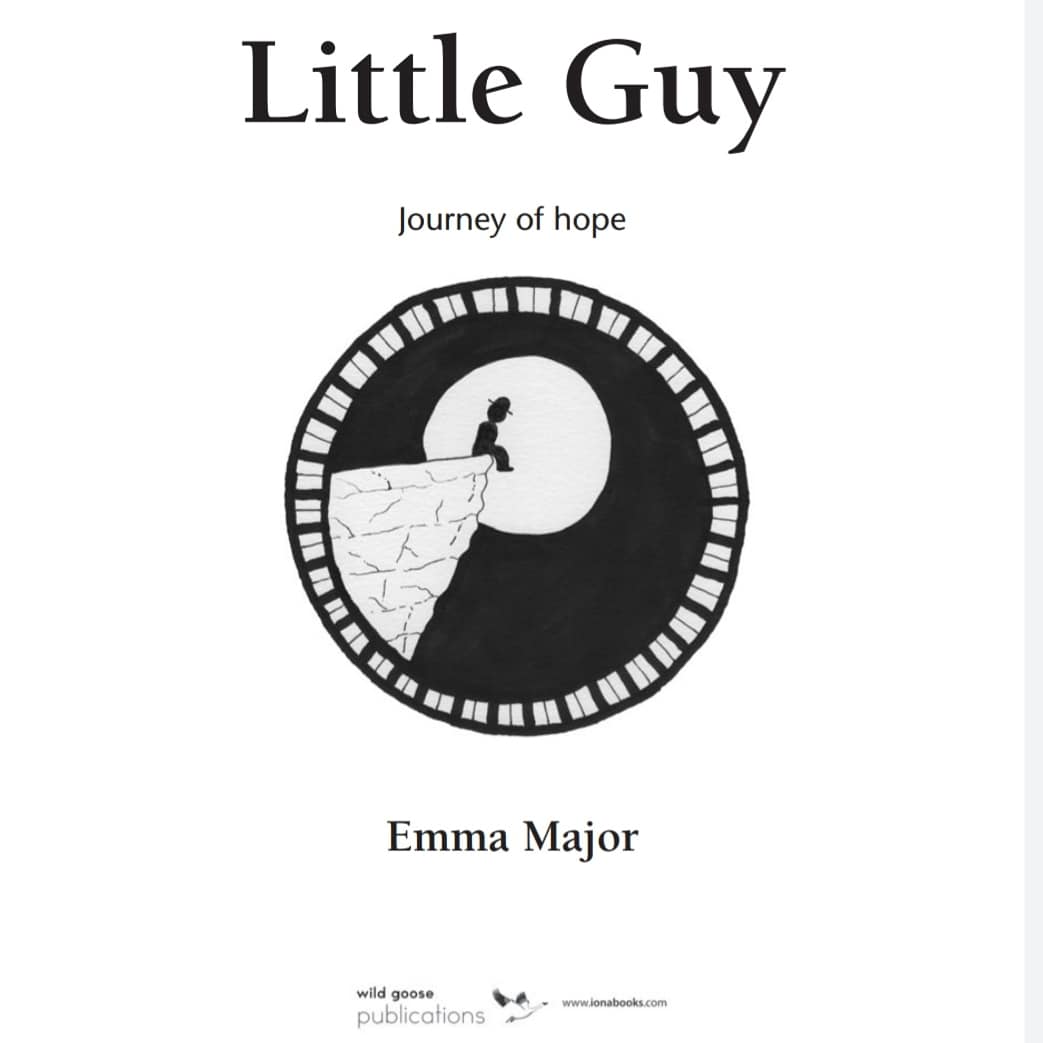 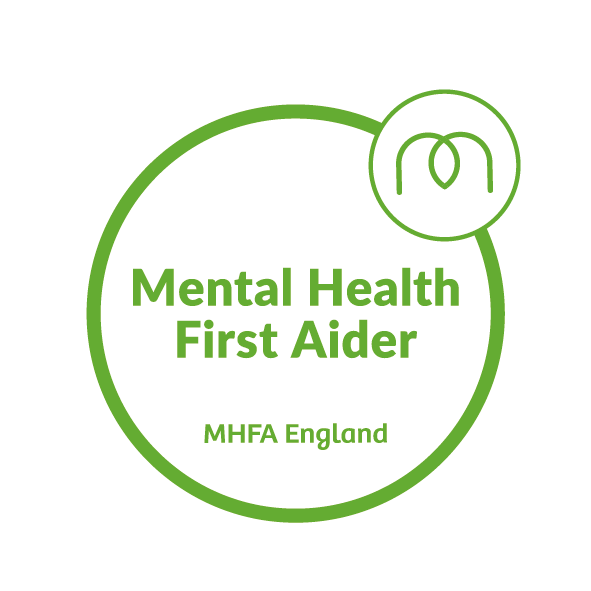 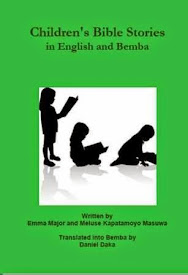 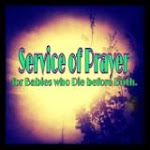